This tool is best used for groups that need to reach agreement about something that can be captured in a document and have some useful starting place. For example, I don’t recommend it for trying to brainstorm something from scratch, but if a group is trying to agree on a plan or strategy, ratify bylaws, or refine a policy, then this is could be the right kind of tool for you. I’ll be using the process of refining a document as an example.

Dynamic Alignment is a tool for complex decision making (not a simple yes/no) for groups of 5 to 5,000 people. It might work for even larger groups or even whole countries, but we’d have to come up with some new interfaces and probably use a method of blind or non-concentrating proxies. (Those proxy processes will be explained in another document.)

We invented the term “dynamic alignment” for group decision making in our small company. A number of us did not like the preconceptions and stumbling blocks that are involved with consensus-building and that may tend to bog down efficient decision making in a group.

The first thing we are differentiating is agreement from alignment. It is quite feasible to disagree about many things and yet make an effective decision. As long as the focus is on having people in the group iron out disagreements, the ability to make a decision is forestalled. We adopted the term “alignment” because we recognized that as long as we’re pointing in the same direction we can move forward. We don’t need to agree about every aspect that is involved with moving forward to make a decision about where we’re going. For example, on a trip, we can align ourselves with going to Seattle, but not agree about the vehicle, route or seating assignments. If the decision to be made is about the destination, being able to recognize when we’re aligned on that allows us make a decision without having to iron out disagreements which are not necessarily best done with the whole group (details about route or seating for example).

The second challenge is positionality. One of the places where groups get hung up with decision-making is when there are a few people digging their heels in about their position. Sometimes this can be disagreeing simply to be disagreeable or it can be about someone feeling like if they give ground then they’re not heard. This is where the “dynamic” part of the name comes from. This process is about movement. No person is allowed to say “no” or stop forward movement without saying what is needed for them to say “yes.”

Remember, this process is best for making complex decisions, so the process starts by outlining the framework of the decision. Each major point should be separated so that it can be considered and responded to directly.

An example: A purpose statement for a start-up organization. Imagine you had a group of founders of a country discussing why they were creating certain constitutional documents. A starting point for the group discussion might look like this:

Purpose Statement for what we’re doing:

a. Unify the colonies so we can stand together
b. Formalize our own legal system

a. Keep the Peace

a. Freedom
b. Take care of each other

Before having people “vote” or voice objections, it is desirable to have people be sure they’re clear about what their reacting to. In a group, you could post the outline on the wall, or read it aloud. Online, you can have people read the document and post clarifying questions to a discussion forum.

Sometimes people have a strong reaction to something and just need space to voice it and have it acknowledged. If you try to engage in a constructive decision making process before getting those reactions out on the table and acknowledged, you can end up with people digging their heels in and being unnecessarily positional.

However, be aware that purposely eliciting reactions can start a cascade of other emotional reactions. It is important for everybody to know that this is a time (or a discussion thread if online) where there is a safe space for people to just share their reactions without argument. The only kind of responses you should make to people’s reactions and objections are of this sort: “I understand.” “I hear you.” “I get where you’re coming from.” Obviously not limited to those phrases, but in the spirit of having someone know they’ve been heard.

Now that people are clear what they’re making a decision about, and volatile emotional responses have been acknowledged, you can begin the actual process of reaching alignment. This involves each person saying they’re aligned with moving forward with the document as stands.

If someone says they’re not aligned, then they need so say what they need to be able to be aligned. There are three possible unaligned states:

For an online decision making process which involves many people and is spread out over a period of time, it would be possible to make an actual interactive control panel in Flash where you can click on someone’s name and see where their icon lies, or click on a set of icons to highlight the names in that status. 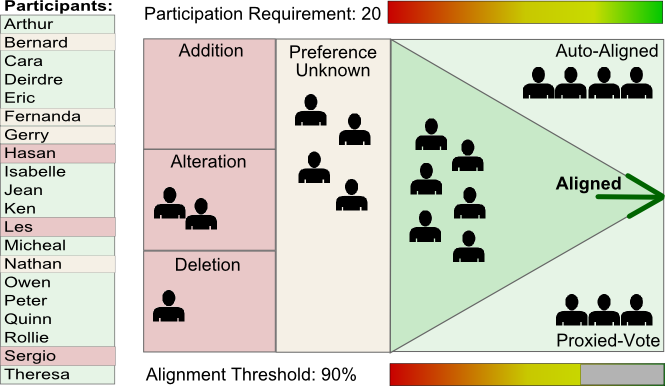 This allows us to see the process of the group moving toward alignment.

You may require a particular level of participation in the process in order to feel that a valid decision representing the community has been reached. This could be a certain number of people involved in the process or a percentage of overall possible participants in the community.

I like operating with 100% alignment, but there are some groups, teams and communities that are fragmented or simply don’t feel they need to reach that level to proceed. You can set the alignment threshold at whatever level is appropriate. When you have that percentage of people aligned, then the decision has been reached.

Possible States for a Participant:

The diagram illustrates a series of different states that a participant in the decision making process can be in.

This is the automatic starting point for each person, as well as the state that they change back to when any substantive changes have been made

This state means that the participant needs this particular text (which they provide saying where it should be placed) in order to be aligned.

This state means that the participant needs particular text modified (and they provide the modification) in order to be aligned.

This state means that the participant needs a specific item deleted in order to be aligned.

The participant is aligned with the document as it stands and is ready to move forward with it in this form.

In the course of a discussion, or a long online discussion process, somebody may feel that another participant represents their views on this one specific matter quite well. They can proxy their alignment to that person so that they are counted as aligned whenever that person is aligned. However, the proxy always represents only themselves in an objection state. People who have proxied their votes to that person will show as preference unknown unless their proxy is aligned

Sometimes when a discussion has run its course for a while, you can see that the group is fairly aligned overall, and is hashing out details at this point which do not affect your alignment with the decision. When somebody feels the dialogue has reached this point, they might choose to automatically align with the group outcome. It is a way of saying, “I’m on board at this point and trust the group to sort out the rest.”

Example of the Process

Preamble for what we’re doing:

a. form a more perfect union
b. establish justice

a. ensure domestic tranquility
b. provide for the common defense

a. promote the general welfare
b. secure the blessing of liberty for ourselves and our posterity

Then someone writes it up all pretty-like into: “We the people of the United States, in order to form a more perfect union, establish justice, ensure domestic tranquility, provide for the common defense, promote the general welfare and secure the blessings of liberty for ourselves and our posterity do ordain and establish this Constitution of the United States of America.”