Fantastical visions of special objects which grant unlimited power seem to hold a compelling place in the human mythos. The Book of Thoth. Zeus’ thunderbolt. The names of God. The Ring of Gyges/Odin/ Solomon/Sauron. The genie in the lamp. The Spear of Destiny. The magic wand. The Holy Grail. The alchemist’s stone. 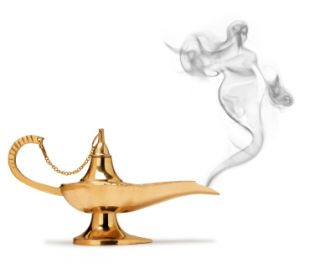 The myths typically warn us about the dangers of pursuing power objects. The lesson usually involves undesirable consequences to the fixated pursuer, or accidental consequences to the world or at least their loved ones. Yet the pursuer continues, ignoring the damage they cause.

The stories point to a deep pathological weakness in humans - the temptation of magical power. Think of how nice it sounds for you to be able to magically summon your heart’s desires without concern for the consequences. I mean, what real consequences could there be? It’s magic, right? “Poof! I have whatever I want.”

These stories are not all fictional. In many ways, the conquistador’s pursuit of gold during the period of Spanish exploration, was this kind of thing. The Nazi’s pursuit of supernatural weapons. The modern investment banker’s pursuit of money.

You see, at some point in fairly recent history, we connected money to this pathological fixation within humans. Money is a magic thing. It gets you whatever you want. If you have enough of it, you can pretty much get whatever you want (with the standard genie-lamp caveats like you can’t make someone love you). Money is universally liquid. You can go anywhere or do anything that you want. Just lay down some cash. With no consequences. After all, you’re paying your way, right?

Or at least it seems like no consequences. Money is structured to hide all its negative side effects from you. Imagine that you’re thinking about buying smartphone. You compare the features to of various phones, and you compare the price. You spend $500. That’s pretty much the end of the story.

You see, the price is a one dimensional number. Some prices are higher than others… some are lower… but no price actually tell you if child labor was used somewhere in the process, or the living/working/wage conditions of the workers, or if people were killed harvesting rare minerals from the Congo. By design, money keeps these things invisible, and economists claim they’ll just somehow get accounted for in the market dynamics of pricing.

Using money which hides the consequences of our actions from our view turns us all into sociopaths.

Sociopath: a person who pursues their own self-gratification without regard to the consequences on others

If we want to, we can make individuals wrong, or businesses, or governments, but we are all operating in a system that turns us into sociopaths by our very participation in it. We can argue about degrees of culpability for it, but in the end, we must replace it with something which can embody proper feedback loops about the consequences of our actions, or we can never live responsibly.

By the way, this is one of the key reasons that my currency designs typically include non-monetary currencies. Simply changing who issues money, or whether or not it bears interest does not address this underlying pathological behavior. Deeper relationships must be included, and money by design is shallow.

[ Tomorrow, stay tuned for what we can do about this sociopathological problem of money. ]