We tend put a lot of focus on watching the flows of a currency as if that is the important portion of transactions. But maybe we should focus more on the flow of value (goods, services, resources, knowledge or participation) which flows in the opposite direction of money in an exchange. It is the fact of shaping and enabling those real-world currents is what make currency so powerful.

A currency itself is actually just a flow of information. But there are two reasons we myopically focus our attention on the currency flow as if it is the one that matters.

Currencies are the Lasting Record of Disappearing Flows

I believe that is the single most critical concept for currency practitioners to grasp. It helps us to break out of bad habits of thinking about currencies in extremely narrow ways (such as believing they have or should have intrinsic value, because precious metals were once used in coins). It allows us to see currencies for what they truly are: formal symbol systems which shape, enable and measure currents which allow communities to interact with those currents.

Let me paint a more concrete picture. Imagine being out for a walk in the snow, and you see a set of small animal tracks where it bounded out from under a hedge and crossed a field toward another shrub. Then you see them end in a sudden deep indentation, with some wingtip marks on extending out from either side. These tracks tell a story — a flow of resources and relationships that took place in that field.

Of course, the story itself has passed. All we have left are the tracks. But the tracks say a lot to well-trained set of eyes: what types of animals were involved, how long ago it happened, which direction the bird flew off, etc. This is the role that currencies play in our economy. Actual currents of resources and relationships occurred and currencies are the tracks they left behind. The tracks are very informative to the right eyes, so we use them to make business and policy decisions.

Different types of currencies track different types of things. The design of the currency makes certain things visible and leaves others invisible. It also determines who has what ranges of movement and track-laying powers.

LETS and Time Dollars have flows of currencies as units are transferred from account to account, even though they are a mutual credit currency with a net total of zero units at all times. Individual account balances are not necessarily zero, and the changes of these balances tell a story about relationships and resources as they moved within the community. It is those counter-flows which the currencies enabled by giving people who may be disenfranchised from dollar access the ability to issue credits by spending into a negative balance. 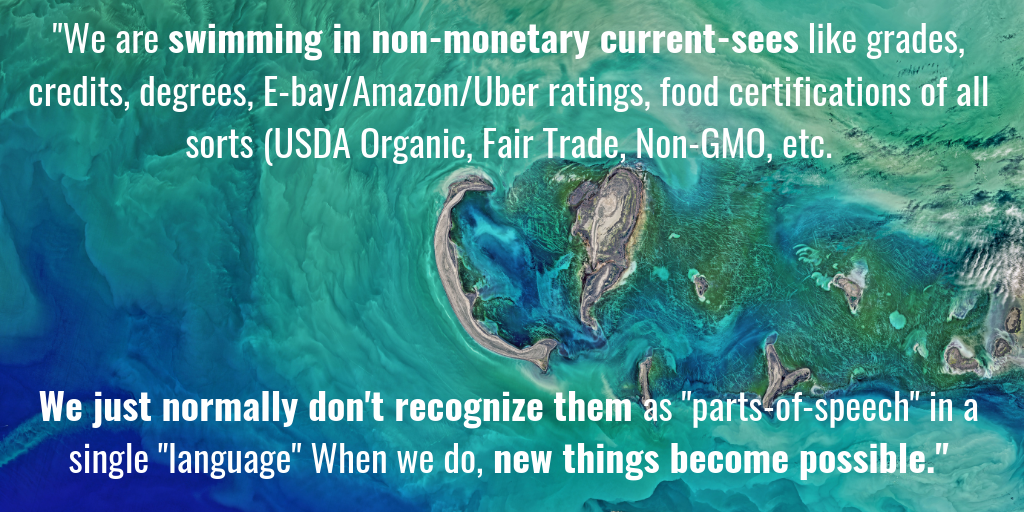 Money is Not the Only Currency

The real power that we gain from these insights is that money is not the only kind of currency. There are many other currencies that we use. We know that we use currencies as a medium of exchange, but also as units of account or measure, as stores of value, and even as tokens of status, worth or reputation.

Our real power as currency practitioners comes in understanding how we currently use these tools in our communities to lay value-tracks and all the ways that currencies can (and should) be used to track our stories of value.

We value excellence in a chosen domain. For many, winning an Olympic Gold Medal stands as the ultimate symbol of achievement within a sport. But it is not the gold that makes it valuable. In fact, different gold medals have been traded and sold. Their price has been determined by who won it when and how noteworthy their accomplishments were. Olympic medals are a token of status currency which tell us a story about races which have long been run.

Even though they can’t be traded, the points, scores and times achieved in each Olympic competition are also currencies which tell a more detailed and nuanced story of participation which has passed. The possibility of winning a Gold Medal shapes the flow of participation of millions of athletes all over the world. Scores are our official way of keeping TRACK. There is a formalized system of agreements about what counts and how it is counted. Certain people or roles are the ones allowed to ISSUE scores and medals. You cannot issue them yourself.

Let me leave you with one thought. There is incredible power in this model of understanding currencies which is largely untapped. Money is so powerful, because it is a currency, not just because it is a medium of exchange. Currencies are the means by which we collectively interact with real flows of real resources. Healthy design and implementation of truly powerful currencies at all levels of endeavor gives us so much more than we get from money substitutes. 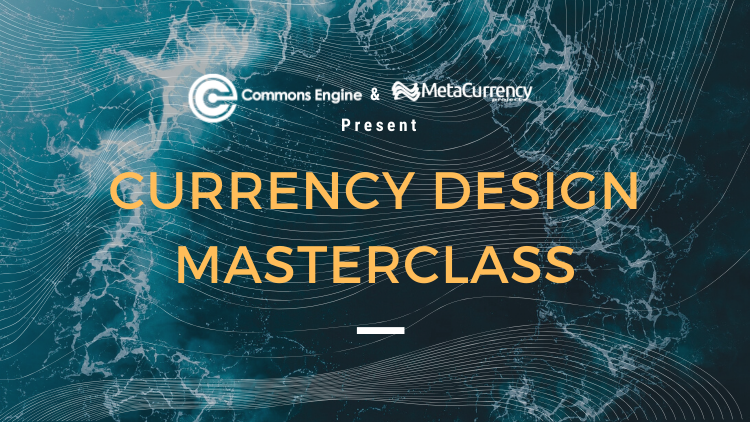