The combination of the blog post about designing reputation currencies and a conference call with the Earth Benign team to plan for upcoming currency design workshopping with their team had me working on documenting more currency design stuff today. Unfortunately, the pieces are still scattered about in multiple documents and need to be unified into something more publishable. 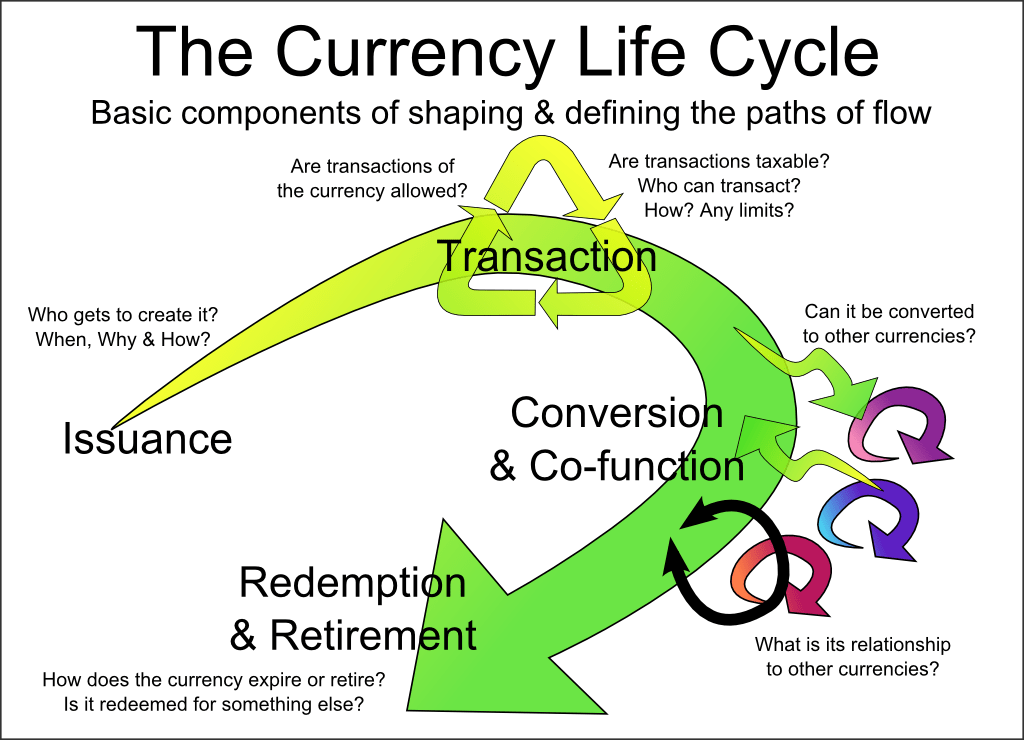 I’m re-publishing one cool thing right now, though - a map of the currency design decision space (according to my 2008 thinking)

One of the things I encountered as I tried communicating with and working with people in the alternative currency space is that there was a lot of heated and emotional argument about fairly minor technicalities. Most people in the space focused on just a couple factors in currency design and seemed to ignore the whole rest of the decision landscape completely. This was my attempt to open up that landscape to everyone and hopefully move toward some shared language instead of getting tripped up over minor semantic differences.

FYI, the two things everyone normally focuses on is ISSUANCE and INTEREST. Who gets to issue the currency and how (e.g. bankers as debt vs. all participants as mutual credit) and do negative or positive balances accrue interest.

To be sure, these domains point to some of the big problems with our mainstream money system. However, these are a tiny part of the picture in the broader sense of currencies as “Current-Sees,” or shared symbol systems we create to shape, enable, and manage flows together.

I made this map for an unMoney Conference in Seattle back in 2008 and presented it there. Strangely, they did not welcome it with open arms and thank me for broadening their sense of currencies beyond just attacking two problems. :P It seemed to mostly trigger another round of arguing semantics.

However, this has been useful in my work in helping people understand how to design currencies to solve problems in their own communities. Which reminds me, I should link to an even earlier document that I use with the currency map a lot to help people expand their thinking about currencies: The Flowspace Brainstorming Worksheet.

But back to the map of the currency decision space… It is an interactive map because it is actually quite large and can’t really fit on the screen all at once. The problem I had to fix is that the old version was in Java, and for security reasons, most people’s browser won’t run it anymore. This is a Flash version (whose days are also probably numbered). Please try clicking on various nodes on the map to open up those branches so that you can explore the whole landscape of decisions we’re dealing with here.